During the last 30 years, lithium-ion (Li-ion) batteries have become the dominant rechargeable battery technology, offering excellent power density and long service lives. Just look to every major auto manufacturer – in the last two years alone, most have started a major shift toward electric vehicles (EVs) powered by Li-ion battery technology and are phasing out cars and trucks with internal combustion engines.

While this shift is indeed a revolution in modern transportation, the adoption of this new mode of mobility is plagued by concerns about practicality and safety – primarily stemming from occurrences of thermal runaway, where the energy in a cell is uncontrollably (and often violently) transformed into heat.

Meeting the demands of use by electric vehicles requires adaptation of existing sensor technology in the introduction of new system monitoring devices. In the case of thermal runaway – which matters for all vehicles powered by Li-ion batteries – sensor technology that is robust, accurate, and fast-responding is a must for vehicle design.

The Case for Li-Ion Technology

When the first lithium-ion batteries were brought to market in 1991, they represented a significant improvement on other commercially available batteries.

Relying on the transport of lithium ions through a non-aqueous electrolyte, rechargeable Li-ion batteries offered extremely high energy densities and long service lives – a marked departure from other nascent rechargeable battery technologies that were commonplace at the time.

With climate change becoming an ever more pressing issue, the following years saw a boom in demand for an energy storage solution that could supplant fossil fuels in vehicles and provide longer-term energy storage for a distributed renewables-based grid.

Lithium-ion batteries are the obvious candidates, and over the last three decades, they have been the subject of enormous research and development efforts to improve their performance and reduce their cost. Today’s Li-ion batteries are – almost without exception – the energy storage medium of choice for portable electronics and electric vehicles. They’re also serving other applications, such as large-scale stationary energy storage systems and as mobile power generation units.

Alongside excellent performance characteristics, lithium-ion batteries were – and still are – largely considered to be safe. However, the otherwise successful history of Li-ion batteries has seen occurrences of catastrophic EV battery pack failures known as thermal runaway. With the seemingly unknown territory of adopting new technology, these battery thermal events are raising concerns for future EV owners.

Thermal runaway is an example of what chemists consider an uncontrolled exothermic chain reaction. In a matter of milliseconds, an increase in the battery cell temperature causes materials to undergo exothermic decomposition. Once this happens, other cells in the battery pack are heated and can begin to decompose as well.

Eventually, the battery starts to heat itself at a rate surpassing that at which it can dissipate heat to its surroundings.

The temperature of the battery rises exponentially and stability is lost, resulting in all remaining thermal, chemical, and electrochemical energy being released to the surroundings.

Testing reveals that thermal runaway is triggered by a number of different mechanisms, including:

Ultimately, thermal runaway results in a vehicle fire, which poses serious safety concerns. Not only does a batter thermal event put drivers and passengers at risk, but also first responders, too, as battery fires are difficult to extinguish.

To be sure, thermal runaway events are not common – but, due to their severity, they are recognized as a serious problem. The absence of an apparent cause in a large number of thermal runaway incidents highlights the need for robust monitoring and detection technologies integrated into EV design.

Learn About our REDTR Sensor Technology for Thermal Runaway Prevention

Research often shows thermal runaway events being caused by “abuse” of the battery. Indeed, lab tests often rely on a few standard procedures for intentionally inducing thermal runaway, for example, by puncturing or overheating a cell.

While these test methods are certainly effective at inducing thermal runaway, they are not representative of the cause of real-world battery failures. In fact, outside the lab, a large number of thermal runaway events have no apparent connection with any kind of system “abuse” or obvious stress factors.

Thermal runaway in Li-ion batteries is not common, but the effects can be severe, including explosions in stationary energy storage systems and the spontaneous combustion of electric vehicles.

Alarmingly, research suggests that many instances of thermal runaway in Li-ion systems occur without any known damage to the battery. As a result, such events can only be effectively mitigated through the use of robust early detection systems. Gas sensor technology is key to this.

Because thermal runaway is an uncontrolled chain reaction, detecting it as rapidly as possible is crucial.

When this multi-phase process starts, a battery cell typically vents evaporated electrolyte at high temperatures. While voltage and temperature often react slowly to this initial venting; gases, smoke, and pressure served as reliable rapid indicators that such a failure is taking place.

While providing quick detection of cell venting, pressure sensors have drawbacks that limit their application in EV battery pack systems. Pressure sensors are small, durable, and inexpensive, but they typically exhibit a poor signal/noise ratio and are too sensitive to pack volume/venting effects for use in thermal runaway detection systems.

On the other hand, while different battery chemistries result in different chemical signatures during initial venting prior to thermal runaway, hydrogen and carbon dioxide gas have proven to be reliable indicators of such failures taking place.

Integrating gas sensors into EV battery thermal management systems allows for the detection of cell failure within seconds – early enough to deploy countermeasures and enable occupants to safely exit the vehicle. In parked vehicles, such a system would enable people nearby to retreat to a safe distance.

Learn about our sensor technology & its applications in electric vehicle design:

As with any new technology used by the masses, new regulations typically follow.

In the case of Li-ion batteries for vehicles, new laws and standards are starting to emerge.

The UN has issued guidelines for similar safety measures in electric vehicles – yet these remain just guidelines.

While there are electric vehicle regulations in the U.S., there are no requirements around thermal runaway detection.

In tandem with laws and regulations, there are new industry standards being implemented for thermal runaway detection as EV technology takes hold in transportation.

Thermal runaway is not unique to electric vehicles – it can also occur in stationary energy storage systems, which typically have much higher capacity.

In energy storage applications, gas detectors can be integrated into battery systems and/or deployed as standalone devices within facilities to provide comprehensive protection against large-scale thermal runaway. Like in electric vehicles, such systems provide an early warning to nearby personnel and enable countermeasures to be put in place early to protect infrastructure and minimize the effects of any impending thermal runaway.

Over the last few years, we’ve been developing our industrial CO2 and H2 sensor technologies to provide robust and versatile detection systems for thermal runaway in Li-ion battery systems.

We started with two engineering test platforms consisting of a variety of sensors with a digital output.

Working closely with OEMs, we learned how to characterize the plumes of ejecta from failing cells in order to detect when cell failure has occurred and whether the fault is localized or spreading to other cells in the battery pack.

Using these results, Amphenol has created the Robust Early Detection of Thermal Runaway (REDTR) system. REDTR relies on H2 and CO2 sensors as well as monitoring pressure, temperature and relative humidity to deliver accurate detection of the early signs of thermal runaway in Li-ion battery systems. By monitoring H2, CO2, pack pressure, temperature and relative humidity, REDTR is completely system-agnostic and can function effectively regardless of the specifics of a given battery system.

Low rates of power consumption mean that REDTR sensors offer a service life of up to 20 years, suitable for any EV or ESS applications. A compact configuration means that the sensor system can be used as a standalone device or integrated directly into the battery management system.

While they can be fairly robust, gas detectors are not indestructible. In a failing battery pack, H2 and CO2 detectors stop working when temperatures begin to exceed 150°C.

However, before this happens, gas sensors gather valuable data that provide OEMs with a powerful diagnostic tool and a window into what exactly is happening at the cell level to cause battery thermal events.

As well as enabling rapid response and danger mitigation in the event of thermal runaway, sensors will one day help eliminate the root causes of cell failure and make thermal runaway a thing of the past.

Speak with one of our engineers about integrating Amphenol REDTR sensor technology. 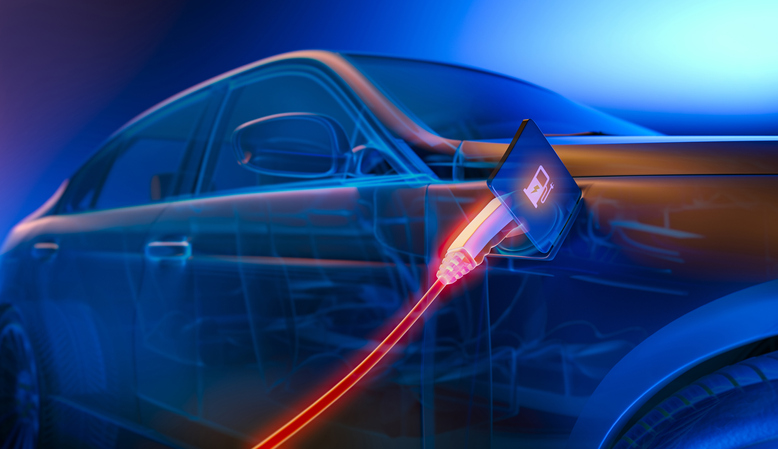 Vehicles fueled by an alternate energy source are no longer a pipe dream.

At the heart of every electric vehicle is its lithium-ion battery pack.